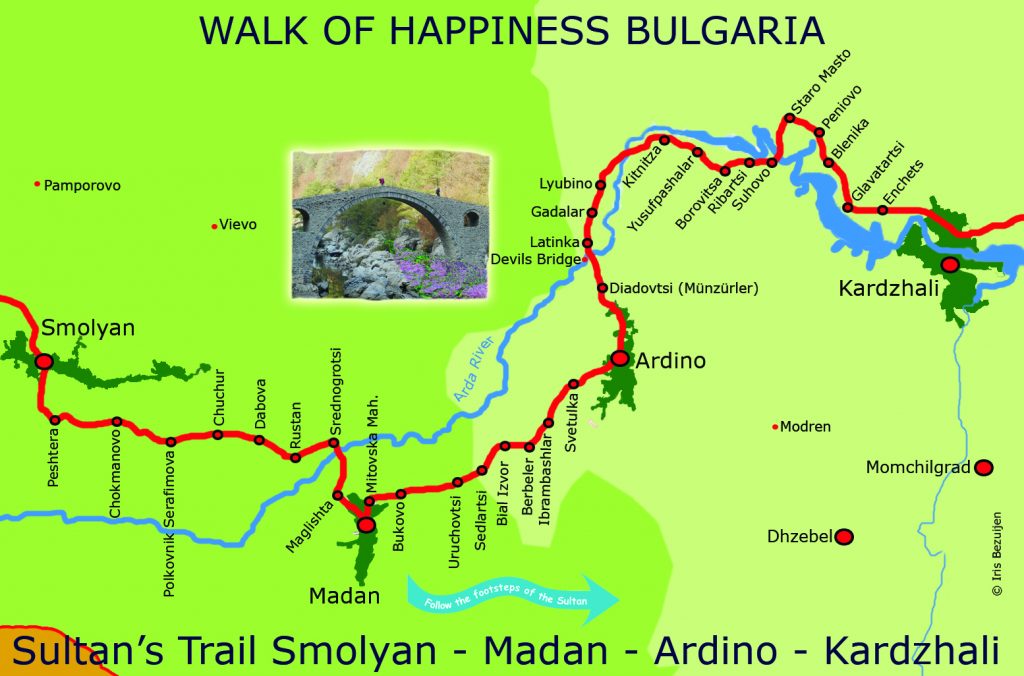 This year it wasn’t easy to recruit a group of hikers that wanted to come along to Bulgaria. Some people that had indicated they would love to come along had to pull out due to nasty private circumstances. All the more joy that we finally managed to compose a group and devise a beautiful hiking route traversing the Bulgarian Rhodopes. The story below describes this hiking trip and some private, Bulgarian adventures afterwards.

Not an easy first day

On Saturday 2 September I flew from Eindhoven Airport to Sofia accompanied by Margo Bos and Josette van Luytelaar. Our Ryan Air flight was delayed and we also took some wrong decisions in Sofia’s underground. The result was that we missed the last bus to provincial capital Smolyan despite all the people that offered us help.

However, we still managed to find a bus to Plovdiv, Bulgaria’s second city. From Plovdiv we took a taxi to Smolyan where we warmly received by Milena Yurokova the hostess of the Three Fir Tree House and a good friend of mine.

The next day she had arranged another taxi that brought us to Borino the starting point of our hike. We entered a gorge that narrowed and the water is squeezed through a system of rock holes known as The Devil’s Bridge. Somehow a group of volunteers has succeeded in building a hiking path through this complicated landscape. We ended our first hiking day in the town of Yagodina, in the weekend that the small town hosted a music festival. However, the music festival was already in the dying hours and our hotel (Mursal) offered a hot tub.

To the highest point in the Rhodopes

On our third day we managed to complete one of our longest stretches almost 25 kilometres ending in the Pomak village Mugla. The Pomaks are a small Islamic minority, in the overwhelmingly Bulgarian-Orthodox country. We spent the night with Nadya and biker Todor.

The next day Todor brought us to a good starting point for the long climb to mountain hut Perelik (1900 metres). The trip with Todor’s jeep was suggested by our Bulgarian guide Hristo Tumbev from Smolyan who knows this area very well. He took us up to one of the highest peaks of the Rhodopes when it was still good weather and brought us to Perelik just before it started pouring down.

After a cold night in the Perelik hut (frost) Hristo took us down along a path that had been blocked by fallen trees in September 2015. Two years later the path was slightly overgrown but cleared of fallen trees. We moved slowly because we kept picking edible mushrooms, moreover, the eco-trail Waterfall Canyon is very photogenic. Our hostess Milena made some very tasty dishes with the mushrooms we found.

On our fifth hiking day led us past a youth camp from the organization Fun in the Mountain. Our final destination of this day was Polkovnik Serafimovo, the beautiful Villa Kati. The following day has caused me quite some blood and sweat trying to reach hotel Izvora in Srednogortsi. Two years ago we almost got stuck in huge blackberry bushes and came in just before dark. We had learned our lesson and hit the road about five kilometers before Srednogortsi and called a taxi.

Up to Shadeetsa changing of the guides

On day 7 the owner of Izvora was friendly enough to bring us to a deserted industrial estate where the route up to mountain hut Shadeetsa starts. In Shadeetsa, with its wide views, we said goodbye to guide Hristo and welcomed a new guide: Alex also from the Smolyan area. The next morning Alex took us down to the enterprising town of Galishte where we bought some precious stones. In Galishte we were picked up by Vasko, the boyfriend of Mihaela Kircheva, who handles most of my reservations in Bulgaria. Vasko dropped us in Byal Izvor and picked us up a few hours later and jointly we visited Thracian niches in the rocks near the town of Ardino. Finally, Vasko drove us in his Legend (the nickname of his bus) to Kardzhali.

In Kardzhali we were joined by three newcomers: Karin van Dam, Monique Kremer and Egbert Rentema. On their first hiking day they were faced with a long stage to the town of madrets where we were housed in a beautiful, old Turkish mansion. The following day brought us to Gnyazdovo, Mihaela’s Lake Retreat, in a few hours. Just before dusk we climbed Fist Rock to encounter deer, admire the views and enjoy the golden shine on the wings of the majestic vultures.

Boat trip after all

The stretch to Gnyazdovo is not part of the SultansTrail but a little private invention just as the boat trip onwards from Gnyazdovo towards Byal Kladenec. Unfortunately, our boat had some motor problems, but Vasko and The Legend brought a new motor and finally we could go into the boat and were dropped close to a viewpoint. From the viewpoint over lake Studen Kladenets we walked to Byal Kladenec where the mayor/shopowner gave us drinks, stamps in our hiking passports and a ride to the next village where he explained us how to continue our route.

We followed the mighty Arda river to the bungalow park: Arda Complex. Temperatures had risen to well above 30 degrees Celsius and we used both the river and the swimming pool at Arda Complex for some pleasant swimming. Our next stop was at the Vulture Centre in Madzharovo, run by some enthusiastic volunteers. One of us provided us a close look of the vultures with her telescope camera.

Our most primitive accommodation: Gornoselci

At the end of our last full hiking day, warm and long, I had prepared my hikers for a bit of a Spartan housing with no showers, an outdoor toilet and no electricity. The outdoor toilet was still there, but there was electricity and our guide Alex managed to build a shower using a garden hose and a plastic cover. The owners of the house in Gornoselci gave us a little city tour introducing us to all three inhabitants of the almost deserted town; among them a 94-year old. So there is a chance that within a few years the village may lose a third of its population.

The contrast with our last destination couldn’t be greater, namely, the Bulgarian capital Sofia. We arrived on a Saturday night and had dinner along Vitosha Boulevard the busiest street where I said my thanks and my goodbyes to my good bunch of hikers.

On Sunday September 17 my hikers flew back to Holland and I took a bus to the Serbian border where I joined Ton Roos, Bram Schouten and Max Smits all colleague-country-coordinators. In their company I walked to the town of Slivnitsa where they headed back to a comfortable hotel and I continued towards Sofia. From Sofia I took a bus to Kardzhali two spent two more days at Mihaela’s Lake Retreat where I did mountain-biking, kayaking and a visit to Misha’s rabbit farm in the town of Tankovo.

A Rila Tour with Intothewild

I would be spending the last three days of my long Bulgaria-trip in the Rila mountains. I had subscribed with a tour from Intothewild the company of guide Hristo. Besides Hristo there were 11 Bulgarians aboard. They borrowed my gloves, hiking poles, a hat, food because they saw I was not really prepared for the snowy conditions that awaited us. The subtle sugarcoating of snow on the Rila peaks created a mysterious atmosphere.

After this very, intense trip into the Rila mountains, I was dropped off in Sofia where I was able to join the celebrations for the birthdays of Iris and Annemie. In style, we ended the trip with a small hike along the SultansTrail route that starts at the mosque of Sofia, turns into Vitosha Boulevard and then heads south through Yuzhen park. In 2018 there will be new Bulgarian hiking adventures.