The Sultans Trail is a long-distance hiking trail through south-eastern Europe from Vienna to Istanbul.

This region has a long history of migration and settlement leaving a lot of different peoples living along the trail each with its own history, language and culture.

The dominant natural feature along a major part of the trail is the Danube river, the second-longest river in Europe, after the Volga. This river was once the long-standing northern frontier of the Roman Empire. The trail follows the Danube through Austria, Slovakia, Hungary and Serbia, where it leaves the river which is left to continue its course east, through Romania unto the Black Sea. The Sultanstrail turns south from the Danube near Smederevo in Serbia at the mouth of the Big Morava, roughly following the ancient Roman via Militaris towards Niš and further to Sofia in Bulgaria, Edirne in Turkey and ultimately Istanbul, the ancient capital of the Eastern Roman Empire and later the Ottoman empire.

The route follows the major migration corridor into Europe since Neolithic times. For the Romans, this route was the backbone of their communication system on the Balkans. Invading tribes from the Asian steppes used the route to penetrate into the Balkans from the north and wrestle the land from the power of the Byzantine empire, leaving us with Slaves, Bulgarians and Hungarians now living in the area. For the crusaders, it was the road to the Holy land and for the Ottomans, it was the route to Vienna.

The trail is in general well provided with accommodation facilities, except for a few areas that require a bit more logistical planning.

Camping is possible all along the way. In Austria, Slovakia and Hungary it is expected that you use official campsites, beyond Hungary rules are more liberal or totally absent. It is advisable however to check with local residents (if any) about the best place to pitch your tent.

In cities and villages, you can find small shops for replenishment.

The trail follows the Roman Limes and Via Militaris so it will not surprise that you will witnesses roman culture surface along the way. Very noticeably in Petronell-Carnuntum in Austria, Budapest, Niš, Sofia and Istanbul.

In the middle ages, various kings ruled the lands. The visual remains of these kingdoms can be seen in Vienna, Bratislava, Budapest, Székesfehérvár, Belgrade, Kruševac, Edirne and Istanbul, along with medieval cities and fortified monasteries.
The major religions along the way are Catholic, Protestant, Orthodox, Muslim, each with different rites, symbols and architecture.
Among Ottoman remains are mosques, cisterns, hammams, caravanserai, bridges and clock-towers.

In some cities, it is possible to take a “communist tour” that takes you back to more recent history.

If you are interested in pre-historic cultures, interesting places are Százhalombatta in Hungary (bronze age Hallstatt culture), Vinča near Belgrade (Neolithic Vinča culture) and the Thracian city Perperikon in Bulgaria.

How to get there

The major cities on the trail such as Vienna, Budapest, Belgrade, Sofia and Istanbul are easily accessible by low-cost airliners,

Within the region, the primal means of transportation is by bus.

Some countries also have a well-functioning train system, like Austria, Slovakia, Hungary and Bulgaria.

It is not always possible to take a bicycle on the bus or train.

Some sticker’s that you may find along the Sultans Trail. Some are already 5 year’s old. 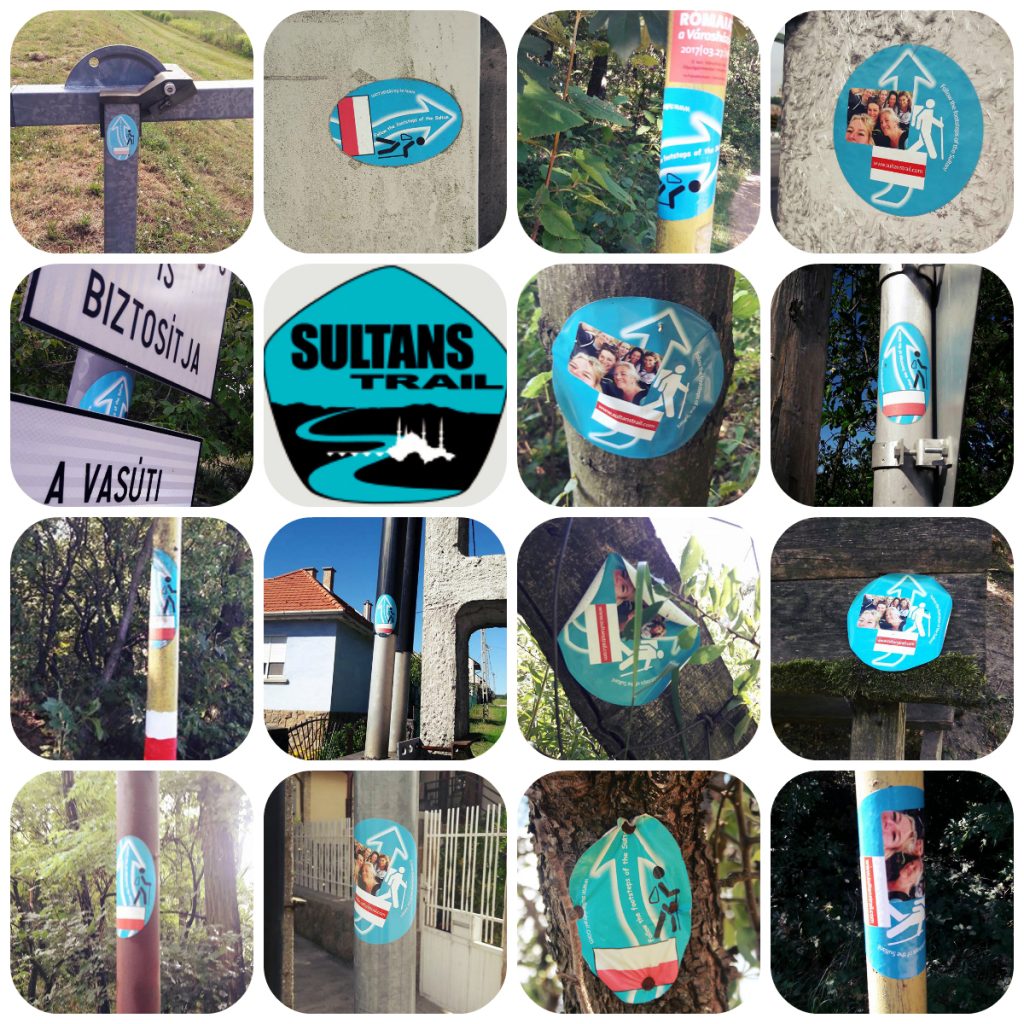