In Austria the Sultans Trail starts right in the center of Vienna at the entrance of the St. Stephens Dome, its tower is 107 meters in height. Consequently,  the Sultans Trail takes you to the Slovakian border along the townships: Simmering, Schewat, Rauchenwarth, Wienerherberg, Trautmannsdorf an der Leitha, Wilfleinsdorf, Bruck an der Leitha, Gerhaus, Rohrau, Petronell Carnuntum, Bad Deutsch-Altenburg, Hainburg and Wolfstal. 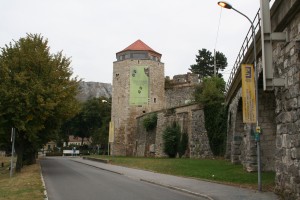 If you would like to hike along an alternative track from Vienna to the Hungarian border you go by Sommerein, Breitenbrunn, Purbach am Neusiedler See, Donnerskirchen, Eisenstadt, Oggau am Neusiedler See, Rust and Mörbisch. After passing the Hungarian town of Sporon the trail returns to Austria for one day passing by the township St. Martin and then finally enters Hungary.

The Kompass biking and hiking maps nrs. 227 (‘Burgenland’) and 205 (‘Wien und Umgebung’) covers the whole route in Austria, scale 1:50.000. These maps are obtainable at specialized bookstores.

The GPS-coordinates of the entire track can be obtained in the  webshop.

With open arms the Serbs are ready to welcome you into their country. Traveling through Serbia, you will see a mix of modern cities and romance of the countryside which has been with us long past. It is a pleasure to see in the village everyday life, where the woman still takes time to sit down with her cows and self- firing of rakia, distilled from fermented fruit, an art sublime. Slivovitz, plum, is the best known.
It is not so familiar to us that Serbs grow much wine (especially going to taste in a small vineyard). Quite often plays a tape Serbian songs during the meal in a restaurant. Like no other people the Serbs know how to enjoy life.

A large part of the Sultans Trail ( 600 km ) runs through Serbia. Serbia is one of the few countries where Google Maps shows no roads. The trail runs along with the following locations:

You get to know the people, culture, and nature. Participants have the freedom to improvise during our trips to the area. We expect a degree of flexibility and openness from our participants.

Serbia fell from 1459 to 1804 under direct Ottoman administration. In 1815 came the Principality of Serbia, a semi-independent principality under Ottoman supervision.

The Sultans Trail runs along with a large number of (historical) places of interest:

Novi Sad, located on the left bank of the Danube, was founded in 1694. The site was strategically opposite the Petrovaradin fortress, an important bridgehead on the opposite side of the river. Novi Sad was only in the 18th century a city developed in the 19th century into a Serbian “Athens”. The city belonged at that time to Hungary, while Serbia was further Turkish. The main attraction is the fortress of Novi Sad and the Church of the Holy Mother in Snowy Tekije. After Belgrade again became Turkish in 1739 attracted many German Catholics, Armenians, Jews, and Greeks from there to Novi Sad. Catholics built when their Snowy Mary’s Church and carried it on to the Austrian victory over the Turks at Novi Sad in 1716.
The Treaty of Karlowitz was signed in 1699 in Sremski Karlovci and came about thanks to the mediation of England and the Dutch Republic. The treaty marked the official end of the Great Turkish War of 1683-1699 who lost the Turks.
Located in the district of Stari Grad in Belgrade:
Kalemegdan (corruption of the Turkish Kale Meydan, Fort Square). The Kalemegdan is also known for its kilometers of tunnels, underground galleries and catacombs, which are still largely unexplored.
Within the walls is the hexagonal mausoleum of Silahdar Damat Ali Pasha (1667-1716). Damad Ali Pasha was Grand Vizier at the time of Sultan Ahmed III and led the Turkish army in the fight against Austria.

Smederevo was occupied by the Ottomans in 1439, after a siege of two months. The town became a Turkish border fortress and played an important role in the Ottoman-Hungarian Wars until 1526.
The Turks built on the Danube side an outside wall and three towers for cannons at the corners. In front of the main gate to the city, there was another tower with a gun that was destroyed in 1880. The large main tower is divided into three floors, with each floor niches in which guns could be placed.
From the Turkish era comes the bathhouse (hammam), and in the center of the large town are the remains of a mosque. In a small town, there are remains of buildings from the Turkish period.
Niš in 1385 was first conquered by the Ottoman Turks to continue until 1878.
The Turks built between 1719 and 1723 an important fortress (Tvrdjava).
On display is worth the Bali Bey’s Mosque (early 16th century) in the central part of the fortress and the old Turkish bathhouse (15th century) near the Stambol Gate at the entrance of the castle.
The Skull Tower on the Zoran Djindjic Boulevard is worth visiting.
In 1386 the Ottoman army conquers the fortified town of Pirot for the first time, but the possession of the region alternated several times between Serbs and Ottomans. In the 15th century, the Ottoman fortified Pirotski final Şehirköy (Encampment). It grows into a beautiful and rich, well-preserved Turkish city.

If you want to book accommodation, please use this link. You’ll support us financially.